Architect, What Do Architects Do, Work
4 Comments

We have a ; okay, let’s just say we have a change. Architect’s by nature like to change things, we like to call them revisions. After a few years (I know, they haven’t forced us to leave the internet yet, wow!) it was time to update the blog title in an attempt to be in sync with goals for the blog. When the blog first started, the initial name was cogitate design blog. Pretty obvious right? Obvious, but not engaging or any indication of the blogs goal- let’s say that was the ‘concept title.’ Next came Real Architect Ramblings… let’s be honest, that sounded like a drunken architect in the corner going on and on and on;

“Datum? I got your datum right here… buy me a beer and I’ll tell you about the time I kicked Frank Lloyd Wright’s ass for some comment about good architecture having leaking roofs…and that’s when I told the engineer, steel, we don’t need no stinking steel… excuse me, I don’t feel so good… I’m going to go design something- it’s been somewhat nice talking at you.”

Suffice to say that title has become the ‘rejected schematic option 1a title.’ 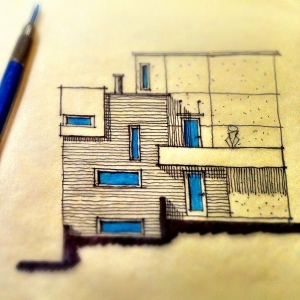 So now the blog moves on to design development, and if you haven’t guessed by now, the new title is ‘Architect’s Trace.‘ Huh? Sure there is the reference to actual trace that architects draw on, but it goes deeper. The current name implies what it is as architects we do, aspire to do, how we do it, etc. The blog is an attempt to trace my experiences as an architect- how it a/effects me, my design ideologies, the built environ, and all I encounter. Hopefully, others along a similar path, or those just curious about architects/architecture, can benefit from my trace(s).

1. A visible mark, such as a footprint, made or left by the passage of a person, animal, or thing.
2. Evidence or an indication of the former presence or existence of something; a vestige.
3. A barely perceivable indication; a touch.
4. An extremely small amount.
5. A path or trail that has been beaten out by the passage of animals or people.
6. A way or route followed.
7. A line drawn by a recording instrument.

1. To follow the course or trail of.
2. To ascertain the successive stages in the development or progress of.
3. To locate or discover by searching or researching evidence.
4. To draw (a line or figure); sketch; delineate.
5. To copy by following lines seen through a sheet of transparent paper.
6. To follow closely (a prescribed pattern).
7. To imprint (a design) by pressure with an instrument on a superimposed pattern.
8. To make a design or series of markings on (a surface) by such pressure on a pattern.
9. To record (a variable), as on a graph.
10. To make one’s way along a trail or course.
11. To have origins; be traceable.

Given the definitions, it’s easy to see that Trace means more to me as an architect than just yellow bumwad (or for the traditional architects, white). Inevitably at the end of a meeting it’s always left behind, thankfully someone picks it up and inquires what it is and the reply is always, “the Architect’s Trace… better hold on to that, we might need it!”