Architect, Design Process, What Do Architects Do, Work
2 Comments

For numerous reasons, I typically don’t enter design competitions (note to self: future post topic). However, several months ago I participated in one. This design competition was for a good cause- Dallas CASA – and was hosted by Bob Borson, the man behind the curtains at Life of an Architect (LoaA). If you haven’t visited Bob’s blog, you must… no, not yet… finish reading this post before clicking the LoaA link- otherwise you’ll never return to the drivel that is Architect’s Trace. The only entry criteria was to be a decent member of the human race. With a broad brush I think I met that. In addition, there was no entry fee and a chance to win a LoaA t-shirt! Good cause, no fee, free clothing… I was in!

The competition brief was straightforward- design a child’s playhouse. Size was limited to 8’-0W x 8’-0L x 7’-6H with a material budget of $4k. Seems simple enough. However, as an architect it can be very difficult to design given a blank canvas. Ideas and sketches bounce off the walls like an 8 year old all hopped up on Skittles and Mountain Dew!

Where to start the design? Ooooh, ooooh, kids like candy, mud, sports, adventure, latest ‘thing’ that costs 6 gazillion dollars, animals, teddy ruxpin (wait, nobody likes that anymore, do they?), sea creatures, cowboys, fairies, cars, spheres, bugs, chicken nuggets, beer (that might just be my childhood), squares, farms, space… The possibilities for the design were limitless. I reached into my architect tool bag and pulled out the ‘concept’ tool- oddly, it’s easily confused with a circle template.

con-cept [kon-sept]
noun
1. a general notion or idea; conception.
2. an idea of something formed by mentally combining all its characteristics or particulars; a construct. 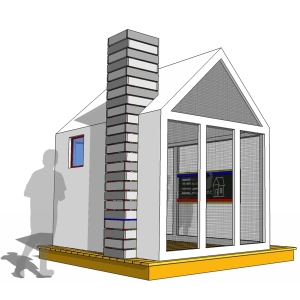 The playhouse concept was simple- the quintessential childhood sketch of a house served as fuel for the design. A child’s sketch is typically devoid of detail and materiality. The focus was on the notion of Home as understood by a child- gable form, door, window, chimney, and a lemon yellow sun. The proposed design abstracted the sketch into a modern interpretation composed of the main elements children comprehend. Form and place were emphasized rather than material and imitation. 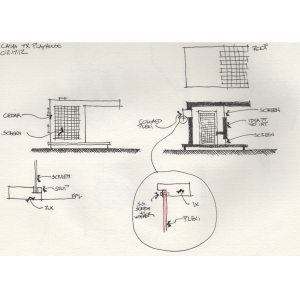 The design was achieved by having a concept to continually test against- was the design supporting the concept or ignoring it? Several times it was ignored and the design took a tumble down the path of various ideas slapped together. I thought, “wow, it would be cool to have a playhouse one used at night…they could lay in it…various openings would be cut into the roof to gaze at the sky…it would…” Most of those sketches were trashed. When compared to the concept, they made no sense and were abandoned. I had committed to and felt the initial concept was strong. Architecture with a strong concept lends itself to an architecture of clarity and cohesive ideas manifested in the construct. It’s one of many design tools an architect can employ. Architects determine a concept and work within its parameters. Concepts are malleable and often reworked throughout the design process. However, if the concept doesn’t work, just toss it out and design good architecture! After all, a concept is just a self-imposed set of rules that mean everything and nothing. Does architecture require a concept? Yes. No. Maybe. It’s all about having a concept… or not. I told you it was easily confused with a circle template!